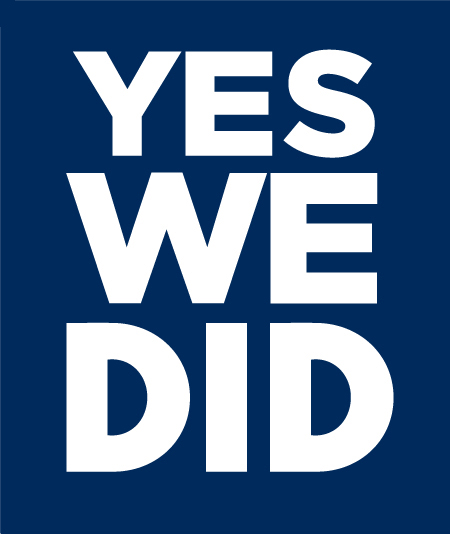 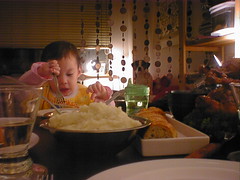 Thanksgiving 2005
Originally uploaded by christinenorrie
As ever, I am forever thankful for YOU. 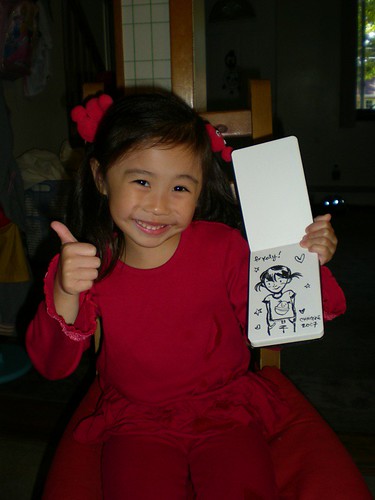 Isn't K.T. super cute? I drew a silly little doodle in her sketchbook and she gave it a big thumbs up! You know who else gets a big thumbs up? ALEX SEGURA. Why? Because he brilliantly created an LJ feed for me so that I don't have to slave away at multiple blogs as my brain melts into a puddle of goo.

So, here's the deal! If you'd like to keep up with my projects and events and what-not via spookoo.com, please click on the link below and add my LJ feed to your LJ feed/friends thingie. I'll likely do most of my posting there and I'd hate to run into you somewhere and you ask, "Hey, what happened with that thing and the so-and-so?" And, I'm all, "Wha-? Didn't you see it on my blog?" Then, you're all, "No, I didn't, I thought you just stopped posting on LJ..." Which I then cry and slobber and you have to pat me on the back and it's just all a mess. SO, let's avoid that and you just click on the clickies and we'll all be happy! Thanks! 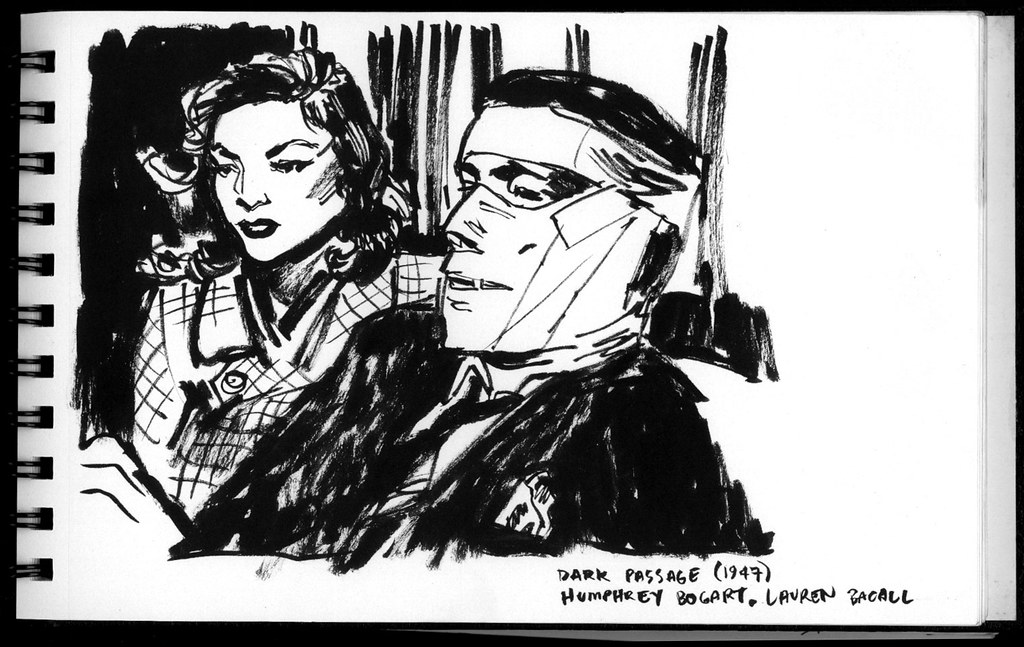 I've got this old book celebrating WB films. It catalogs by genre, with a screenshot, credits, and a brief summary for each movie. I like flipping through it at the end of a long day, then sometimes something catches my eye and I doodle it in my sketchbook. 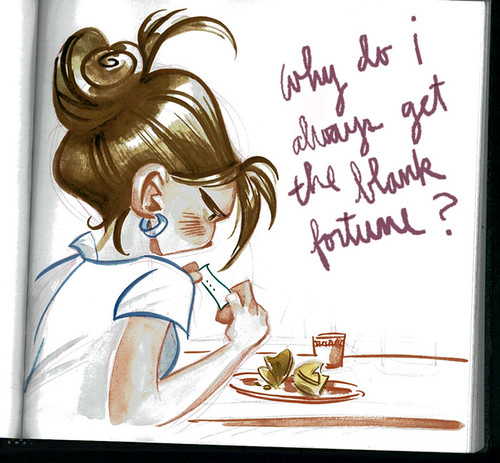 This Saturday I will be participating in my second Asian-American event this summer. My first was at the spectacular and very well-informed Asian-American Film Festival where I was exposed to amazing writers and artisans, so brilliant and smart, who center a piece (sometimes largely, sometimes little) of their cultural roots and ethnicity in their work. It's made me consider my own background, since that is an aspect I have never consciously strived for in my work, much less think about except when trolling through my brick of take-out menus. However, in more closely examining my background as a German-born, Thai-Scot, first generation American hapa, I realized that I am a terribly strong advocate of diversity and have been for some time.

Besides my well-travelled biography, my own portfolio and bibliography is also all over the map. From vague sci-fi ethnicities in TEEN TITANS GO, to the "It's a Small World" cast of BREAKING UP and HOPELESS SAVAGES. I've also discovered that the only wholly culturally-specific work I've illustrated is the Mexican-American franchise SPY KIDS. Which, of course felt very familiar to me since I grew up partly in Tujunga, California, where I went to a Spanish/English bilingual school, and in my teens, my favorite comics were by the Los Bros. Hernandez.

So, if you'd like to be enlightened by more of my muddied perspective, please come to Chinatown!


Thinking Inside the Box:
Asian Americans in the Comic Book and Graphic Novel World

Jann Jones is Senior Coordinating Editor for DC Comics who has worked on adding three new titles: Billy Batson and the Magic of Shazam, Tiny Titans, and Super Friends to the DC Comics line.

Jae Lee rose to prominence for his work on Marvel's Namor the Sub-Mariner and Inhumans (for which he won an Eisner Award), as well as his character Hellshock. He is currently working with Stephen King on the Dark Tower series for Marvel Comics.

Christine Norrie has worked extensively as an artist and comic illustrator since 2000. Her most noted works include her original graphic novel Cheat, the Oni Press series Hopeless Savages, and the newly released graphic novel Breaking Up.

Larry Hama is a writer/cartoonist/illustrator who works in comics, television, and film. He is best known as the writer of Marvel's G.I. Joe and Wolverine comic book series. He is currently working on Storm Shadow for Devils Due.
Moderated by DC Comics editor Pornsak Pichetshote. 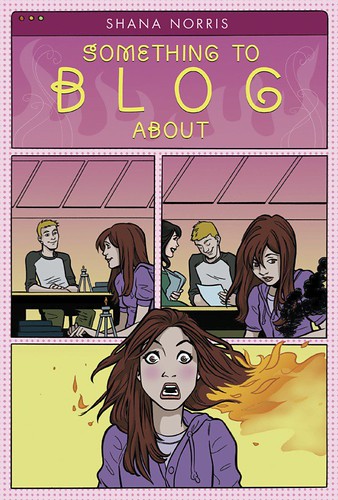 The following is a long mosaic of the art I went through in order to cultivate the book illustration for Amulet Book's "Something to Blog About", a YA novel written by Shana Norris. I was contacted by art director Chad Beckerman, sent the manuscript, and started sketching in July. Throughout the days and weeks, we casually bounced back images and ideas, let the art rest, then would work in a fever over a day, then more discussion. My favorite moment was when we both exclaimed that we needed texture and pattern! There is nothing like a good editor or art director who can raise the game and make you feel good about your work... 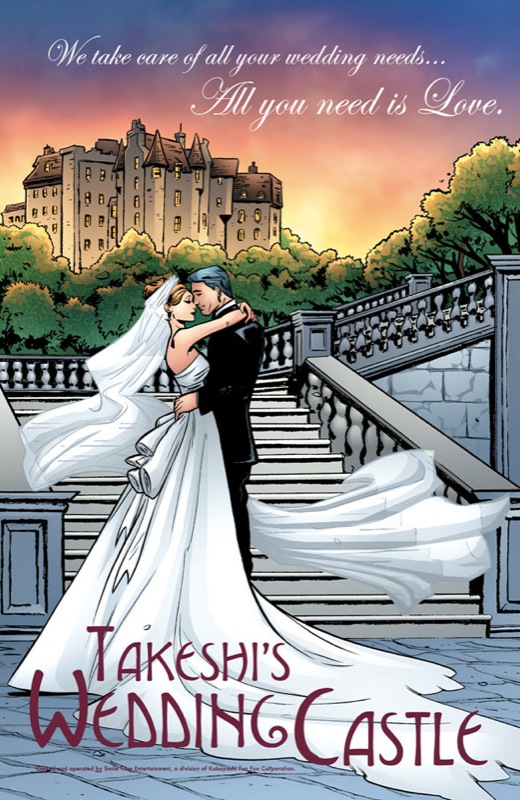 The Black Canary Wedding Special is out! I contributed a couple pin-up type pages... check out Newsarama's PREVIEW. 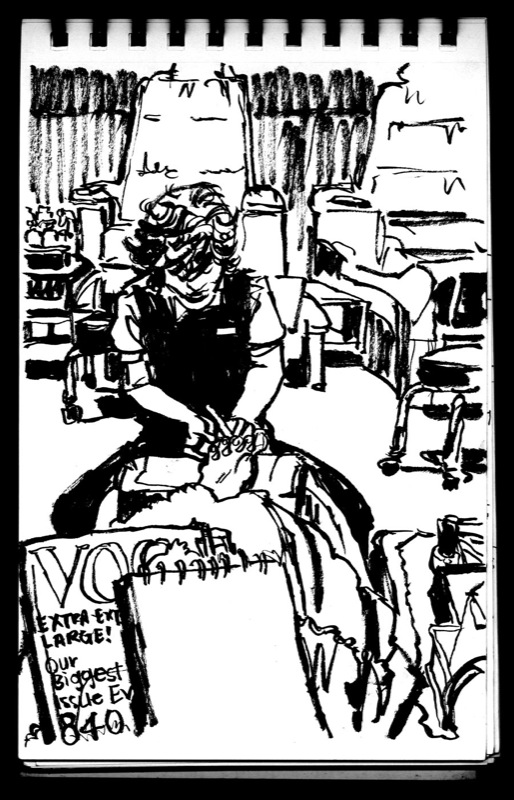 Remember when I twitter'd that I was sitting down with Sept. VOGUE and getting a pedicure? Well, I looked at Sienna Miller on the cover, sighed, and pulled out my sketchbook instead. It was a slow day in the salon, I was at Iris Nails across from Grace Church (I normally go to the one on University, but I was meeting my sister for coffee later at Le Pain Quotidien on B'way).

Anyway, it just so happens that my good friends have also mentioned the reading of the Fall:

http://kathrynimmonen.com/
Please see what Kathryn has to say, as well as a look at her terrific postings of FASHION ARTIST.

http://www.immonen.ca/news/
Stuart is also touting Kathryn's blog and has a nice sketch and ramble about current couture. Including the Sartorialist! 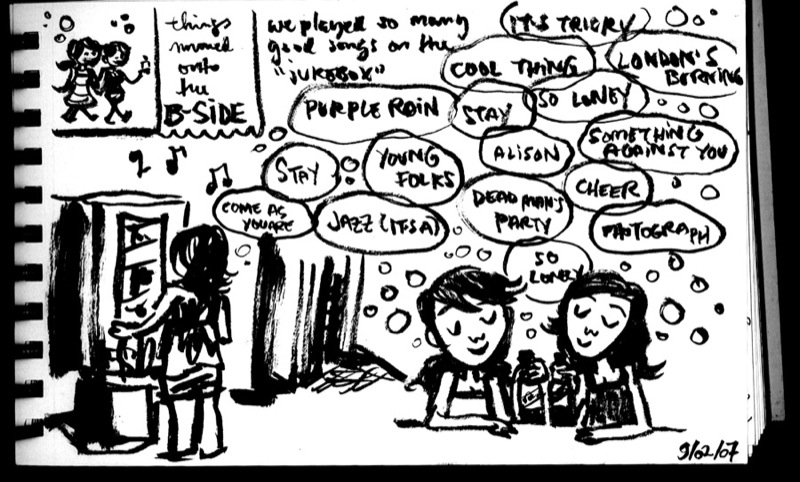 My sister and I went out this past Saturday night and I doodled our entire adventure out. Including a hilarious thirty minutes at Village Yokocho where we communicated soley via notes/drawings in my sketchbook because we were seated at a table right behind an ex-friend we didn't want to hear us talking. We also had a really swell time just drinking beer and dropping dollars onto the jukebox at The B-Side. You can tell that I'm pretty tipsy since I wrote down two song titles twice... in any case, can you guess:

1) the artist/band that goes with the song? No googling!

2) and for a cooler challenge, try and guess which sister chose which song!
Collapse